Death Threats and Discrimination: The life of a Muslim Politician

Islamophobia is increasingly rife in the UK and many other parts of the world. For those Muslims in the public eye, threats and hate can be a constant concern.

At JAN Trust, unfortunately we hear stories of Islamophobia all the time. Many of our service users are Muslim, and they have experienced everything from having their hijab pulled off on the bus home to being shouted at in their own neighbourhoods. We know that many Muslims are victims of hate crime, but what about Muslims in politics?

The UK government currently has 15 Muslim MPs. It is brilliant to see more ethnic and religious diversity in parliament to truly represent the makeup of our population. However, across the political spectrum, several Muslim MPs and politicians have reported Islamophobic abuse.

Over recent years, MPs have begun to speak up about the harassment they experience, especially online. Sajid Javid has been the target of Islamophobic social media content between Conservative Party members discussing how they could prevent him from becoming Prime Minister. Comments included remarks such as ‘Britain is not ready for a Muslim PM’, the idea that he would only ‘protect his own’ as a Muslim, and that Britain’s ‘Islamic problem’ convinced people to cancel their party membership.

Earlier this year, Naz Shah MP recounted some of the threats she has received: ‘String her up’; ‘I hope you see your children dead in your arms’; ‘You don’t deserve life.’ She implored parliament to address the issue of Islamophobic hate crime.

Shockingly, verbal abuse is not the only hate crime experienced by Muslims and Muslim politicians in the UK. In 2018, four Muslim MPs received letters inciting violence against Muslims and encouraging a so-called ‘Punish a Muslim Day’. The packages enclosed ‘low-level’ noxious sticky substances. They turned out not to cause physical harm, but two party employees were hospitalised as a precaution; the fear caused by these actions is deeply unsettling. In response to Islamophobic threats, Mayor of London Sadiq Khan has resorted to 24-hour police protection. As terror attacks against Muslims have become more common, many Muslims are worried about their safety. Naz Shah represented this fear powerfully in parliament: ‘I do question, as many Muslims across this country do, which Muslim’s life will be next. Will it be mine?’

Muslim members of congress in the USA have also spoken about similar abuse. Congresswoman Ilhan Omar has talked about threats to her family and herself as one of the first Muslim women in Congress- like Sadiq Khan in London, she has had to have security staff to keep her safe because of the number of threats she’s had. Omar tweeted a photo of one of the threatening messages sent to her, with very disturbing and frightening content including a death threat. 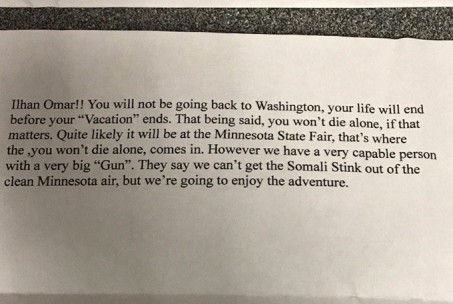 Omar has also discussed the issue of being seen as the representative of all Muslims, having to answer for things that other members of Congress are not asked. She and fellow congresswoman Rashida Tlaib are regularly asked to condemn terrorist organisations like Al-Qaeda, and issues like FGM, simply because they are Muslim. The implication that they are responsible for these issues, or that if they do not condemn them they must support them, is offensive. For other politicians, it is assumed that they oppose such atrocities, while these congresswomen as Muslims are expected to constantly prove their views.

The responsibility of those in power

Muslims in politics are not just concerned about members of the public and mainstream media inciting and spreading Islamophobic views and hate crime. The effect of other politicians’ comments and views on Islamophobia can have a huge effect on public opinion and therefore the safety of Muslims.

In his recent speech in Parliament regarding hate crime in the UK, Tan Dhesi MP drew attention to the reported rise in hate crime against Muslims following Johnson’s Islamophobic description of women wearing niqabs as looked like ‘bank robbers’ and ‘letter boxes’. In the week following Johnson’s article there was a reported increase in anti-Muslim hate crime by 375%; that’s 38 incidents in one week, more than five incidents a day. Most of the incidents in that week were directed at women wearing the niqab. JAN Trust service users reported verbal abuse relating to Johnson’s comments, some being called ‘letter boxes’ in the streets where they live; evidence of the knock-on effect of his words.

This is a crucial point: when high-profile figures make comments like Johnson’s, ethnic minorities and especially women face the consequences. When Donald Trump tweeted suggesting a group of congresswomen of colour should ‘go back and help fix the totally broken and crime infested places from which they came’. Trump’s comments led to crowds at a rally chanting ‘send her back’, aimed at Ilhan Omar who was born in Somalia and came to the US as a refugee aged 10. This hateful behaviour demonstrates how even a few tweets from people in power can manifest in impassioned public racism.

At JAN Trust we work to combat all forms of hate crime and support marginalised women to stand up to abuse. We appreciate all that Muslim politicians do to raise awareness of these issues and the encouraging changes they are pushing for to help protect Muslims in the UK.

JAN Trust (www.jantrust.org) is a multi award winning not for profit organisation formed in the late 1980′s. We are based in London and cater for women and youth from disadvantaged and marginalised communities. Our work and services are delivered locally, nationally and internationally. Our aim is to create positive and active citizens of society by educating, empowering and encouraging women and youth. We are dedicated to the cause of combating poverty, discrimination, abuse and social exclusion among Black, Asian, minority ethnic, refugee and asylum seeking (BAMER) women. JAN Trust is making a real difference in improving the lives of communities; promoting human and women's rights as well as community cohesion. We provide a range of services and our work has been recognised by a variety of dignitaries. Check out our website for statements from some of our supporters: http://www.jantrust.org/what-people-say
View all posts by JAN Trust →
This entry was posted in Campaign, Campaigning, discrimination, Ethnic Minorities, Hate Crime, Inclusion, Islam, JAN Trust, Muslim, Uncategorized and tagged discrimination, Donald Trump, Far right, hate crime, Hate Speech, Ilhan Omar, islamophobia, Muslim, Muslim women, Naz Shah, Nusrat Ghani, online hate crime, politicians, Politics, Racism, sadiq khan, Sajid Javid, UK politics, US politics. Bookmark the permalink.
%d bloggers like this: